A few years ago, FriendBoy (remember him?) moved to Poland and I promised to visit someday. Well, someday happened last week and I have to say, it was the best trip EVER. 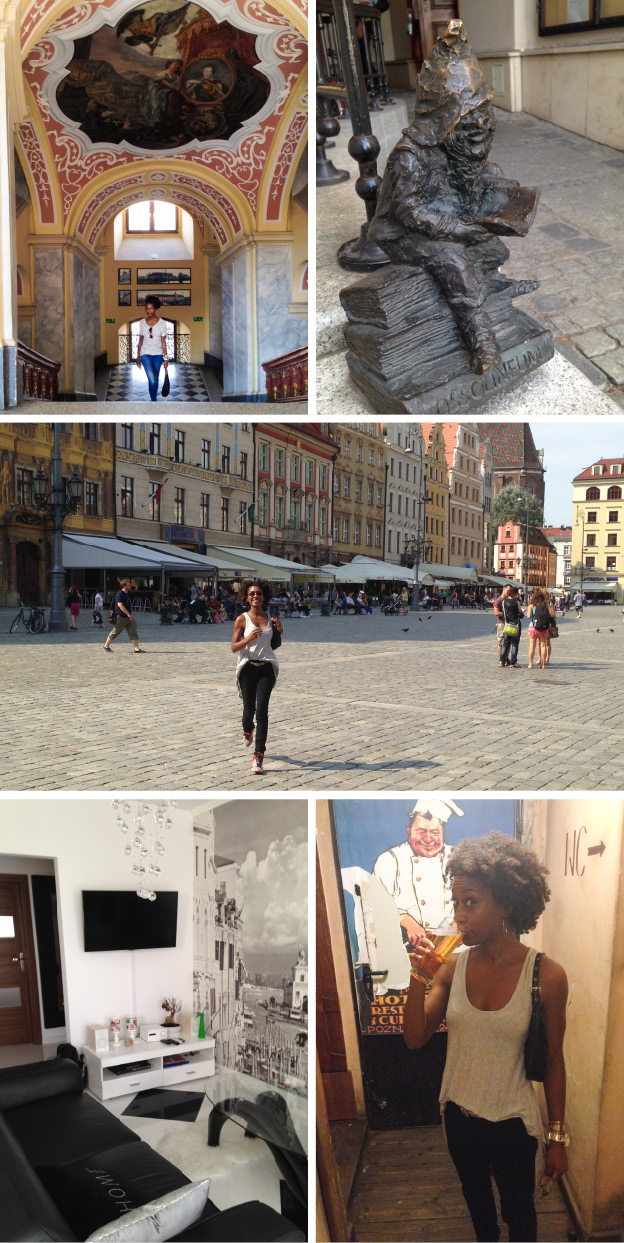 Wandering the hallowed halls of Wroclaw University; the city is dotted with amusing little gnome statues; running through Market Square; my super-modern apartment; trying the local brew (beer is gross, so it was terrible)

My apartment in Wroclaw was in the ‘hood, but the flat itself was fantastic. I found it through Airbnb and highly recommend the service–just do your research, read the reviews, and contact the host before you request the booking. I had the entire apartment (and the crazy shower with  multiple sprays and rainforest showerhead) all to myself and it really was my home away from home.

Roaming the streets of Krakow; stopping for tea in the Jewish Quarter; Krakow’s Grand Square; obligatory (and yummy!) pierogies; the Church of Saint Peter and Saint Paul

We took a day trip to Krakow, which was bigger, more crowded, and absolutely beautiful. We explored the heart of the city, climbed up towers and down into caves at Wawel Royal Castle, and roamed the streets of the Jewish Quarter, which was probably my favorite area. Why? Because between all of the young couples, hipsters riding bikes, historical architecture, and the laid-back vibe, it reminded me of Over-the-Rhine!

After a few days in Poland, I boarded a bus (the PolskiBus actually, operated by the same good folks who run the MegaBus) and headed to Prague. I arrived around 6pm local time, and stepping onto the Old Town Square in Prague was like stepping onto a movie set. There was music, dancing, grand buildings, shops, restaurants, people everywhere–it was almost like a carnival!

Climbing the hill to Prague Castle; looking up at St. Vitus Church; a view of the city and Charles Bridge; carb lovers rejoice–there’s bread everywhere; the changing of the guard at the castle

One of the best things about Prague was the people I met there: people from Australia, Wales, Brazil, Saudi Arabia, South Africa, Mexico, Austria, Israel, and of course, other Americans. We had dinner together, bonded over drinking games and late night Mickey D’s, and shared travel tales (apparently everyone in the world gets more vacation than we do in the US). As far as the locals, these folks know how to party: bars don’t close ‘til 5 or 6am, and there’s no such thing as last call. There were several times when I went to bed as the sun was coming up!

So, in summary: history, culture, urban exploration, new friends, all night parties, and a lifetime of memories. Best trip EVER.