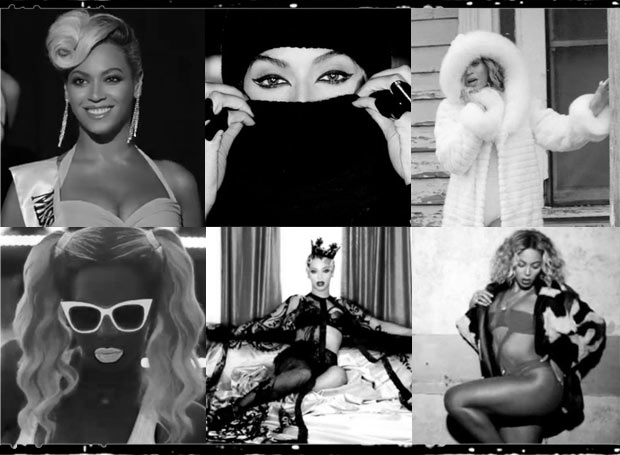 On Friday the 13th, Beyoncé released a secret “visual album” complete with 14 songs and 17 videos, canceling out pretty much everything else that thought it mattered in the world of pop culture. To be clear, I am not a Beyoncé stan–there are several of her songs that I actively dislike, and I feel zero connection to her public persona–but as a woman of color trying to find her way in a creative industry, there’s really no denying the power of the brand that is Queen Bey. Let’s review, shall we?

In case Beyoncé  hasn’t already been forced upon you by your friendly neighborhood Bey-liever, please note that the production values of this project are ON POINT. The instrumentals and vocals are expertly blended, the creative imagery is varied and imaginative, and the videos are flawless. Hair, makeup, wardrobe, choreo, dancers, sets, editing…do you know how much work it takes to produce a high quality album of songs PLUS inspirational videos to go with each one PLUS some extra? Yes, she has a fantastic team, but that takes WORK. It has always been said that she has a solid work ethic, and she’s proved that again with this project.

Beyoncify yo’self lesson #1: Ain’t no half steppin’. If you’re going to do something, give it your all and do it RIGHT. It’s tempting to give up or make half-hearted concessions when you’re tired, discouraged, or bored with the whole thing altogether, but see it through to the end and give it 100% every time.

If you recall, Beyoncé tested a similar concept with B’Day, releasing a video album with videos for each song. It was a solid album, but the way it was released and the quality of each video wasn’t quite as groundbreaking (it also wasn’t funded by a major corporation, so there’s that). I respect her commitment to that initial idea and her willingness to switch up the execution.

Beyoncify yo’self lesson #2: Things may not go perfectly the first time out of the gate. Do the absolute BEST you can (see lesson #1) with what you have, and learn from what happens. Take notes. Review them often. Make sure you understand what worked and what didn’t, and continue to refine your vision. Repeat.

Lacefront-grabbing industrial fans and gropey stage-side stans be damned, Beyoncé is a consummate professional. The show will go on and she will not miss ONE NOTE. Anyone else would’ve run off the stage in a panic/screaming/in tears, but Bey is focused. Her audience came for her show, and she put on her show the way it was intended.

Beyoncify yo’self lesson #3: Sometimes ish happens. It’s frustrating, it’s annoying, and it would be easy to get upset and tell everyone to screw themselves while you curl up in bed with a pint of Haagen Dazs. But that’s not how you learn, that’s not how you get things done, and it’s certainly not the way to personal growth. Stay focused on your ultimate goal, and keep it classy.

Releasing music with no warning isn’t new. Skipping the whole pre-release marketing circus isn’t new. Promoting an album exclusively via social media isn’t new. But combine those ideas with the relatively rare concept of a visual album, a buy-all-or-nothing sales strategy (the album is currently ONLY available as a full album, no singles), and a superstar with a massive fanbase and it’s clear that the game done changed.

Beyoncify yo’self lesson #4: New things are scary, no doubt: unknown outcomes, potential backlash, possible rejection around every corner. But no matter what the field, any creator worth their salt is constantly trying to think of newer, better, different ways to do things . Sometimes the only way to find out which ideas are solid is to TRY them. Take action. Just do it.*

Musical tastes are subjective so I’m not really interested in writing an album review (though I’d be lying if I said I haven’t had “Blow” and “Partition” on repeat) or an analysis of the way Beyoncé presents as a feminist (though I have PLENTY of thoughts on that), and I realize that this post is only adding to the Beyon-saturation of the Internet, but sometimes I need motivation, y’all. So I figured I’d put it in writing for me and for anyone else who might need it, too.

*Has anyone ever said that before? I feel like that’s new.