Hope everyone had a happy new year! Mine was spent in seclusion save a few sanity-preserving outings:

New Year’s Eve was spent hunkered down on the couch, swathed in a Smurf-blue Snuggie with my computer on my lap. There was a very klassy orange juice and beer toast with FriendBoy at midnight before I got back to work and finally nodded off around 3am. How exciting!
Quick tip: Do not try to use the bathroom while wearing a Snuggie–it won’t turn out well. Don’t say I never taught you anything.

On Friday, FriendBoy and I went to see his sister (who lives in Florida and was visiting for the holidays) and his new niece. The baby is only two months old and is such a cute little dollbaby! No, really, she’s a ringer for a Cabbage Patch doll. I almost turned her over to look for the Xavier Roberts signature on her butt. 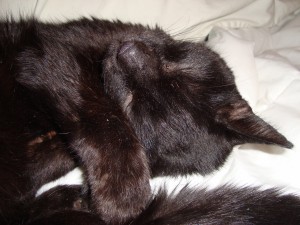 On Saturday, I had to drop foster kitty Beauregard off at PetSmart, where he will remain for two weeks or until adopted, whichever comes first. I have to admit, I teared up when they put him in the kitty crate in the adoption area–he looked so confused. FriendBoy had to practically drag me away, and it was hard not to cry at the idea that he might think I abandoned him. He’s just such a sweet little guy.

Both of those outings took longer than intended, so I really had to sequester myself from the rest of the world in order to get the new issue of Style Sample together in time. Thanks to the overwhelming generosity of the blogging community (I really love y’all), a new cover girl and emergency writer came through and we’re ready to roll! Thanks Andy and Anna!

How was your New Year’s weekend?