Friendboy started a software development company earlier this year, and after only a few months of coaxing, he agreed to take five minutes to talk to me about a logo for his company. I don’t know what his deal is. Half the fun of starting a business is branding.

He named the company Toliman, after one of the three stars that make up Alpha Centauri. Yeah, he’s a geek. He’s also fairly traditional, having worked in computer programming and law–two industries not exactly known for wild creativity. I figured I’d keep things simple and fairly tame.

Since Alpha Centauri is often designated using the α symbol, I knew I wanted to include it in the logo. After playing around with several fonts, I settled on Georgia, a classic serif typeface that works well in print and on the web:

It doesn’t look like much, but this is where the tips I talked about in how to design a simple text logo come into play. I adjusted the kerning, elongated the letters just a touch, and replaced the letter “a” with a green (his favorite color) α symbol.

Can you tell what else I adjusted?

I created two versions of a standard business card–one simple and one slightly more design-y–as well as basic stationery. Do people even communicate via paper any more? 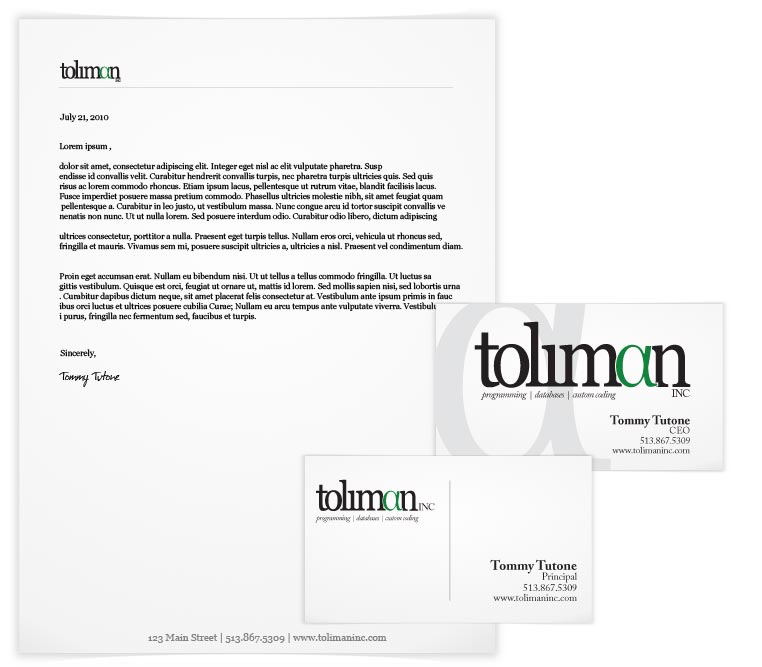 Surprisingly enough, he liked it! I guess if you don’t have a creative brief, it helps to really know your client.

I love these types of projects!