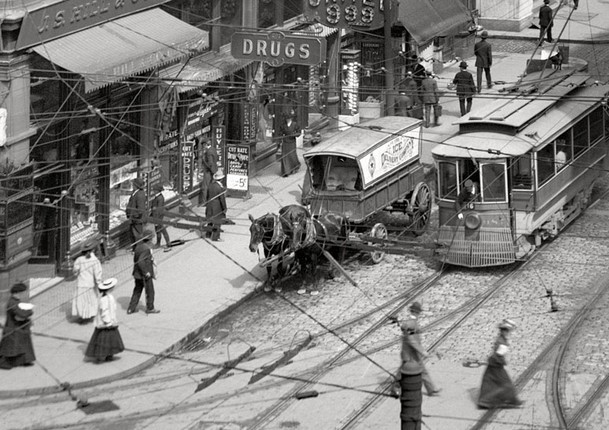 I recently wrote an article about Cincinnati’s shopping history for the December issue of A-Line magazine. Real talk: writing is NOT my favorite pastime. But research? I’ve been doing research projects since encyclopedias and card catalogs were the only way to find information and I LOVE research. LOVE IT. If it were up to me, I’d forego all that “writing” jazz and and just list a bunch of facts I find interesting. And since this is MY site, and it IS up to me…

Often credited as the first shopping mall in the US & Located on East Third Street, Frances Trollope’s Bazaar housed a coffee shop, a ballroom, and an ice cream parlor in addition to selling clothing, home decor, and trinkets from England. It was a flop, and closed after only two months in business. A partial view of the Bazaar building can be seen in the 1848 Cincinnati Panoramic Daguerreotype at the Public Library downtown. I-71 now runs through the place where it once stood. 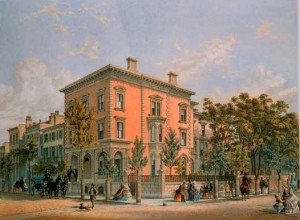 When you wanted to show off your custom-made dress, women wore their new finery to promenade along the street in front of Edmund Dexter’s residence on 4th Street, right in the heart of fashionable Cincinnati. I suspect this would’ve been a prime location for street style photos!

Some department stores published their own fashion magazines with news from Paris and illustrations of the latest styles, much like the popular Godey’s Lady’s Book and Harper’s Bazar  (you KNOW I would’ve been all over that). It struck me that the magazines and editorial content published by retailers today–ASOS, Barney’s, Net-a-Porter, etc.–isn’t really a new idea. 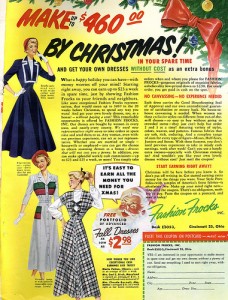 Founded in 1908 and in business from the ‘20s to the ‘70s, Fashion Frocks (currently home to the American Sign Museum) was the Avon of dressmaking. Housewives across the country acted as direct sales representatives for the company. Each Fashion Frocks “counselor” would receive a kit with sample sales cards showing the finished dress (including fabric swatches), postcards for marketing to other housewives, order forms, and a selling guide to “save you time and trouble and help you make friendly, satisfied customers”.

In the late ‘60s, the model expanded to include merchandising parties, and women would give parties in their homes where guests could try on different styles and shop the catalog. So, yeah, that tactic has been used to sell everything from Tupperware to flavored body oils.

What the heck are “Cape effects”?

Clothing manufacturers in Cincinnati were active as well. A sales letter dated September 1932 from Louis Levine and Sons on West Seventh Street noted that their newest styles included “…new cape effects, new neck and sleeve treatments, and we are using a number of new extremely good looking materials, both in silk and woolens.” I’m not sure what “cape effects” are,but First Lady Eleanor Roosevelt was a fan of Levine dresses,so…

Small but not forgotten

And let’s not forget some of the other smaller, less well-known shops like Klein’s, LaMode Skirt Co. at 601 Race, the Parisian Corset Store at the corner of Race and Opera Place, Lawton’s, Heldman Clothing Co. in the Pugh Building, not to mention the numerous shoe manufacturers — Julian-Kokenge Shoe Co, P. Sullivan Shoe Co., Homan-Hughes Shoe Co., and Krippendorf-Dittman, which now houses the Sycamore Place Lofts. 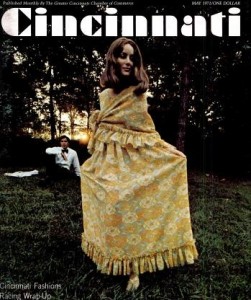 I literally screamed (and scared the heck out of my cat) when I found an article called “Made in Cincinnati Designs Swing with Color and Style” in the May 1971 issue of Cincinnati Magazine. The fashion forecast? Cut-out granny boots and sandals “that lace up the leg” were predicted to be hot sellers that summer.

Even international designers were aware of Cincinnati’s fashionista reputation. Lucile, also known as Lady Duff-Gordon (remember in Titanic, when Rose mentioned she was a designer of naughty lingerie?) was a world-renowned couturiere who saw fit to visit Cincinnati. She was one of the first designers to take advantage of opportunities for commercial endorsement, lending her name to advertising for shoes, brassieres, perfume, and other luxury apparel and beauty items.

If you have time, I’d definitely suggest spending an hour or four in the Cincinnati History Library and Archives, as well as checking out Cincinnati Views, the Greater Cincinnati Memory Project, and this fun(ny) 1949 Cincinnati entertainment map.