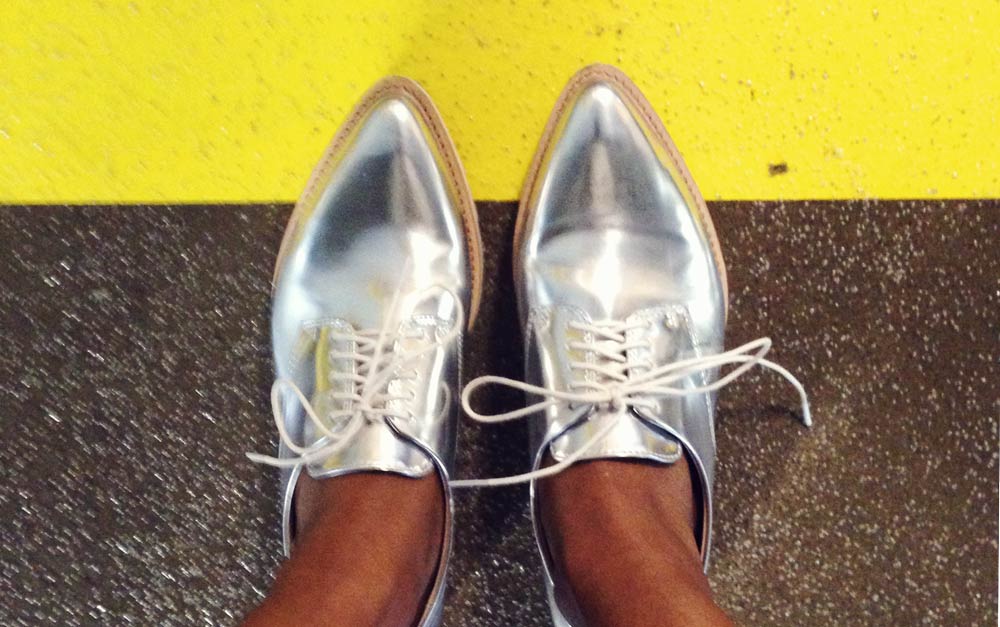 Don’t get me wrong, I love a good heel. But as a fan of menswear, something about the whimsical-yet-no-nonsense vibe of shiny metallic brogues adds just enough machismo (and comfort) to keep an outfit from getting too sweet. SHOP IT! //

I found this vintage skirt years ago while browsing at some random thrift store. Because of the fit and flare shape and pastel-y palette, I usually go for a ladylike look when I wear it, but this time I was feeling less dainty housewife, more slightly androgynous la garconne. Worn with a men’s button down (I cut it into a crop top because

I’ve been doing a lot of running around for the past few weeks due to several back-to-back photo shoots for Cincinnati Magazine’s October issue and our special style-focused SHOPS publication. If it’s 70+ degrees and I’m going to be scouting or doing pickups and returns, I’ve developed sort of a uniform: some variation of cotton tank + pencil skirt + sandals. Zara top, ASOS skirt, Jeffrey Campbell booties (I'd forgotten about the Ugly Shoes!) It’s cool, it’s

Let it be known that I love a good bootie--and a good booty (#realtalk). Ankle boots always seem to provide just the right touch of downtown chic to any look, and right now I’m obsessed with these patterned boots. Both pairs are relatively comfortable, and are juuuuust dressy enough to make it seem like I tried to look nice on days when it takes ALL of my effort just to put on pants. The trend has

Oops, I Did It Again

A little over a year ago, my life was changed. I obsessed for weeks--should I or shouldn’t I?--before finally making the move. I bought my first pair of Nike x Liberty Sky High Dunks. The compliments haven’t stopped since, and let’s keep it real, we all know that’s what fab shoes are about. Last year, a woman waiting next to me at a restaurant literally demanded to know where I’d bought them and looked them up